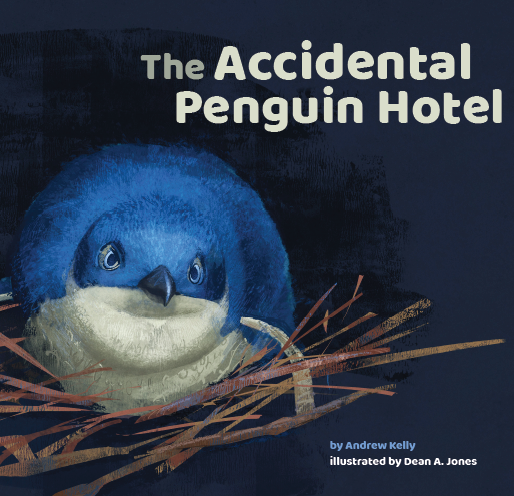 The little penguins come to the rich waters of the bay to hunt, but they don’t stay. There is no place to build a home. So they travel far, back to their island.

What will it take for one little penguin to make the bay his home?

The story of the new penguin colony at St Kilda in Port Phillip Bay is endearing as Kelly outlines the life of the little penguins, so well known for their habitat on Phillip Island off the coast of Melbourne. The illustrations for this magical story are outstanding, revealing the penguins swimming beneath the waves, staying clear of the surfers above, fishing and nestling in their burrows. Kids will be thrilled.
Fran Knight – ReadPlus

This picture book explains to youngsters how these cute birds, also known as fairy penguins, checked into a bayside “hotel” – a man-made breakwater – and stayed on. Alongside captivating illustrations, it’s also an informative guide to how the penguins migrate, build habitats and develop colonies.
The Weekend Herald Sun

Told by the Yarra Riverkeeper and beautifully illustrated this is an uplifting story that shows that the relationship between humans and the natural world can be a positive one, as well as demonstrating how that world adapts to deal with issues such as overcrowding. But charming as it is as a standalone story, it is one that has enormous potential to be a springboard into further investigations both of the penguins (with comprehensive teachers’ notes) and then human impact generally.
Barbara Braxton – Teacher Librarian

There’s a lot to love about this book. The colour palette used by illustrator Dean Jones picks up the inky blue tinged upper body and flippers. The story reveals the life cycle of the little Penguin as well as touching on the dangers they face. The thing I loved the most about this book is that it shows children that animal colonies can adapt and thrive in city areas. Australian teachers and librarians should definitely check out [Wild Dog’s] catalogue, there’s a lot of gems there for use in the classroom.
Lucy – Love Four Learning

My daughters adored this story and loved even more knowing that it was based on the real Little Penguins that populate Melbourne’s bustling areas. The Accidental Penguin Hotel written by Andrew Kelly has a lovely story and gorgeous illustrations by Dean Jones perfect for those little ones who might grow up in the area and be familiar with the penguins.
Jessica Russell – Can You Tell Me A Story